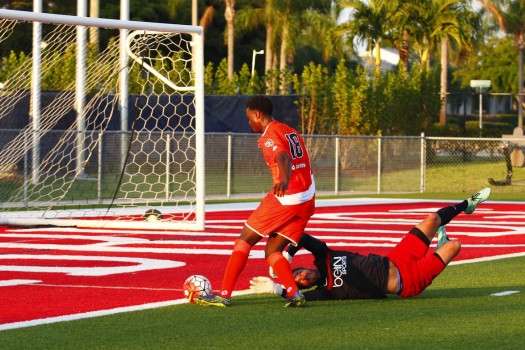 Boca Raton, Florida– This past Saturday (May 21) marked the season opener for the Palm Beach Suns FC. The long awaited game against Miami City FC (last season’s division winners), finally had come and the Suns were ready to take the field with a fully experienced squad. Although experienced, nerves started to tense for both teams as they warmed up for kick off at 6 p.m. The game kept you on the edge of your seat. The two teams battled the whole 90 minutes, encompassing 13 shots, 26 fouls, and 4 cautions, leading to result in a 1-1 tie.

The first goal was scored by the Suns in the very first 3 minutes of game play. The goal assisted by Christoffer Simensen, a midfielder coming from a division 1 league in Sweden. His experience and skill has elevated the team, and will continue to contribute greatly to the team as the season progresses. The goal was scored by Palm Beach County’s very own Rockie Dobson. Simensen sent Dobson an amazing through ball between Miami city FC center backs, and Rockies composure and goal scoring abilities took it from there finding the back of the net. Coaches were surprised to see Dobson’s speed as he sprinted by defenders running onto the ball, striking a left footed shot into the corner of the goal, just barely beating the keeper. Dobson, age 21, played a very strong first game, given he has never played soccer on a competitive level. Some may say he has a gift. Dobson has hopes to make it to the MLS one day, but for now he celebrates his first ever competitive game and his first goal.

“This is extremely exciting for me, I have only played soccer with friends, so scoring the first goal of the season gave me an amazing feeling, scoring on a semi-pro soccer team is so surreal. I am looking forward to the rest of the season, hopefully more goals will come my way”, Said Rockie Dobson.

Miami City FC, maintained composure and fought hard to get back the goal they lost in the first half of the game. Their defense was strong and their attack started gaining ground. They were able to tie the game up in the last few minutes of the game. Miami City is a strong team, and due to their season win last year, they are a huge contender this season.

The Suns coaches, would have loved a win in the first game, but are very pleased with the way the Suns played, the Suns players have only been together for 1 month, a 1-1 tie against last season’s strongest team is an accomplishment. The Suns will continue to grow, and come together as a team, after this tie, the coaches are expecting the Suns will lead the league.

“Considering the strength of Miami City FC, we had a wonderful result, as a whole, we have only had one scrimmage as a team leading up to the game. Miami was able to put a large amount of pressure on us, but we feel like we are able to apply that same pressure. I am happy to see the results, but we have a long way to go, and a lot to improve on, we are looking forward to rest of the season”, stated Head Coach Chiquinho.

This coming Saturday May 28th the Suns go head to head with FC Florida Surf at Oxbridge Academy, at 7p.m. Don’t miss out, on what you missed this week, get your tickets now at www.PalmBeachSunsFC.com.!!!