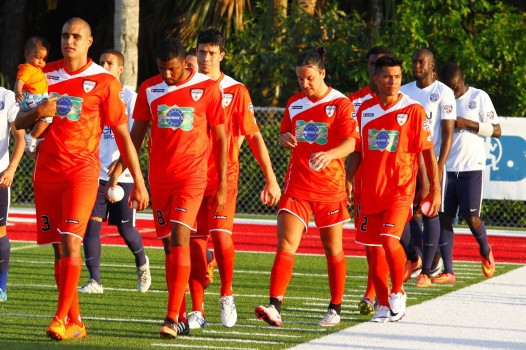 Boca Raton, Florida– This week (May 25) The Suns went head-to-head against conference rivals Floridians FC at Central Broward Regional Park. Last season the two teams had the pleasure of playing each other 3 times, the Suns winning 2 games and the Floridians winning 1. This year the tension has risen as the Suns sought to continue their overall wins. However, this first of three head to head match ups was a difficult one to predict. The Suns have been training hard for this 2016 season, but it seemed coming into this battle, the Suns struggled to keep their heads in the game as the result of the game was 3-0, Floridians.

The result of the game, though was a disappointment for the players and coaching staff. Keeping in mind that this is the player’s second game together, the coaches know there is a lot of work to be done. They expected to regain momentum, by coming together as a whole and push forward, to take the right to call them selves the top team in the conference.

“This is the first couple of games, there will always be bumps in the road, and we just need to move forward. We are still a new team, once we get acclimated, we will start to win”. Said General Manager Xavier Silva.

The Suns Starting goal keeper Igor Luczensky, had a great game, with an amazing save in first few minutes. The save came from a rocket shot about 20 yards out, seeming almost impossible to save. However Igor came through with an amazing stop, saving what looked like an upper 90 shot. The Suns are happy to have Igor apart of their squad, and expect to see much more from him in upcoming games.

“We are lucky to have Igor apart of this club, he had a great game, making up for some defensive errors in the back. His level of skill has helped greatly in this game, and he is very capable of becoming a top level goal keeper”. Said Head Coach Chiquinho.

The Suns have a long season ahead of them, they will get stronger and push harder in training, to become one of the top teams in the PDL.

This Saturday (May 28th), the Suns will fight for a win against South Florida Surf Fc, at our home stadium at Oxbridge Academy at 7p.m. Also don’t forget that it is kid’s night, this Saturday kids under 18 get in free!! And there will be a halftime shoot off for our youth fans, with prizes awarded to the winners! Get your tickets now www.PalmBeachSunsFC.com.!!!