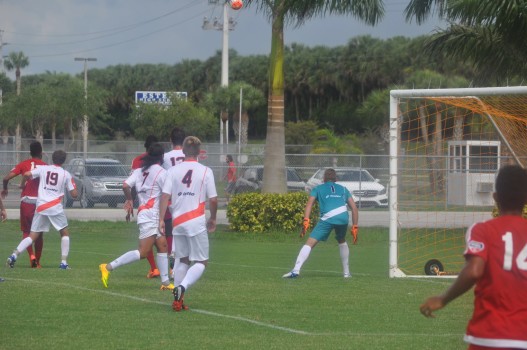 (Boca Raton, Florida)- Monday June 20th the Suns played an away game against SWFL Adrenaline in Naples, Florida. Another closely matched game, the Suns were able to attain the most possession of the game, however had difficulty securing a win. The game was extremely emotional, and kept everyone on the edge of their seats till the end of the match. The Adrenaline were able to sneak in a last minute goal, leaving the score at Suns 1, and Adrenaline 2.

In the first half, skills were evenly matched, both teams fighting for possession equally as hard. In 15 minute of the game, the Suns conceded a foul just outside the keeper box. The Free Kick was taken from about 25 yards out, where Adrenaline was able to send the ball past the Suns wall, beating Suns goal keeper, leaving the score line at 1-0 Adrenaline. The Suns battled hard to even the score, but could not overcome the Adrenaline defensive line.

Coming into the second half of the game, the Suns made a key substitution, Renan Troccoli, a midfielder/forward, from Brazil. Shortly into the half, Renan was sent a short through ball into the Adrenaline box that he was able to run onto, and slot the ball into the back of the net, tying up the game 1-1. Only minutes later, again Troccoli, was able to dribble past 2 Adrenaline defenders, and the goal keeper, but couldn’t get the ball between the goal posts. The rest of the game was intense and highly competitive, lots of tension from both teams.

After countless fouls, and opportunity fails at goal, the last play of the game in the 91st minute, Adrenaline was able to score a goal. An Adrenaline left winger sent in the perfect cross into the Suns box, where an attacker was able to get a foot on the ball that found the net. The final whistle was blown just seconds later, leaving the score line at 2-1 Adrenaline.

“Unfortunately we have not been able to find our groove this season, we made a few little mistakes in the back that resulted in costing us the game”. Said general manager Xavier Silva. “This league is very tough and the players are very skilled, little mistakes like the ones we made will be capitalized on quickly”.

The Suns will rematch SWFL Adrenaline on July 13th, at their home stadium at Oxbridge Academy. Tickets for that game on sale now at Palmbeachsunsfc.com. Come and support your Suns!