Suns defeated in rematch against Floridians 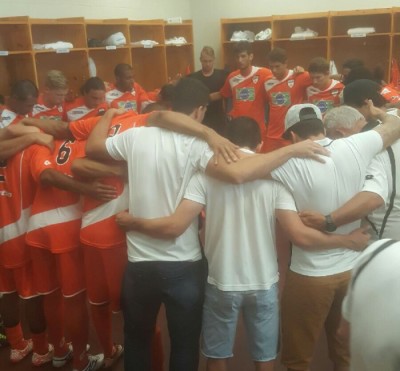 Boca Raton, Florida– The Palm Beach Suns Fc battled the Floridians Fc at Oxbridge Academy on Wednesday. This game was originally supposed to take place June 8, but was postponed due to unplayable weather, the safety of our players and fans are of the utmost importance to us. The Suns and Floridians were looking forward to this game as it was their second time meeting this season. The first game took place at the Floridians home field, where they outplayed the Suns, leading to a result of 3-0 Floridians. This time around the Suns were able and ready to take on the Floridians in this rematch, however were not able to break the Floridian defensive line, and could not get the ball in the back of the net. The game was an all-out war, as there was 8 cautions, 2 of which resulted in William Hopfner being ejected from the game.
The first half of the game was very even, both teams taking a number of shots at each other’s goal. One of which our very own William Hopfner A.K.A. Kiko, rocketed a shot in the 13th minute, that was just barely knocked out over the goal by the Floridians keeper. Soon after, Kiko received a yellow for a harsh cleats up tackle in the 14th minute.
In the 22nd minute of the game, a long ball was sent by a Floridian midfielder towards the Suns goal box to an onside forward, Ganzalo Medina. With no defenders in sight, the Suns goal keeper Igor Luzcensky came out of his box in an attempt to head the ball away from the forward. However Igor was unsuccessful in his attempt, and the ball was reached by the Floridian Forward first, just knocking the ball past Igor, leaving an unattended wide-open goal. This Lead the score line 1-0 at halftime.
As the second half of the game commenced, the cautions started to roll in. in minute 55, 1 caution was issued to the Floridians, due to unsportsman-like conduct, almost causing a fist fight. Minute 60, Suns midfielder Edivaldo Silva Jr. conceded a caution due to excess fouls. Unfortunately Kiko, conceded his second caution, resulting in him being sent off the field without replacement. The foul the Kiko conceded was right on the border of the Suns box, Floridians were able to sneak by the Suns wall with the penalty kick, where Igor was able make a huge save, keeping the score line at 1-0.
“It is really tough when the team loses a player, 10 vs 11 men is never easy to cope with, but I feel like the team did well to maintain their composure with the loss of Kiko.” Said General manager Xavier Silva. “We fought hard, and did our best to keep the Floridians from scoring any more goals, we need to score goals and we are working on creating a stronger offensive line”.
Now being one man down a second time this season, the Suns had to up their defensive game to protect their goal. The Suns seemed to be well enduranced over the Floridians, as they had more possession of the ball, running harder, faster and had more control in the midfield. The Suns were just not able to break through the Floridians defense and get a clear shot off. Final score of the game was 1-0 Floridians.
This Saturday June 18, at 7pm, we take on the Floridians for the last time this season at our home field Oxbridge Academy. This is going to be a big game, make sure to come out and support your Suns. Tickets are on sale now at
www.PalmBeachSunsFC.com.!!!