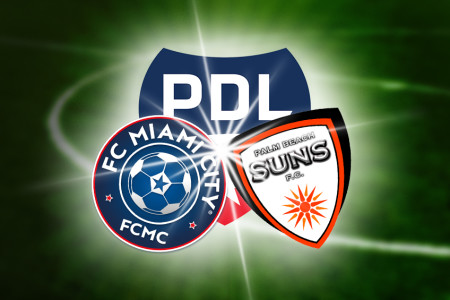 Boca Raton, Florida– Suns fans! Do not miss out on the season opener this May 21st! Your Suns F.C. will be going head-to-head against FC Miami City.  To all the devoted suns fans out there this will be a matchup to remember. These two teams are no stranger to each other as last year  both teams faced twice int he regular season, the Suns hustled for a 1-0 win, then later in the season FC Miami City pulled a 2-1 victory over the Suns. This year, the PDL doesn’t expect anything short of an astonishing performance from both the Suns and Miami City, both teams will be fighting to gain pride with a win, to finish this long awaited tie breaker.

“If I am not mistaken, last year’s games with Miami City, we both had 1 win a piece, so I think for a first year team we always want to come out better, stronger, and most importantly smarter. I think that we are capable of coming out with an even better performance than last year, and we will come out shocking people with the progression we have made”, stated General Manager Xavier Silva.

The Suns will not go down without a fight, the coaches anticipate the team to play their best, and to set themselves on a positive track for the rest of the season. This matchup could mark the start of an extraordinary season for the Suns and the PDL, as the rivalries start to flood in. The Suns have tirelessly been working to prepare for this season, the players have been training physically, and mentally, and the coaches devising new strategies, and formations. The Suns are ready to secure a win against Miami City, and look to produce great results this season.

“Despite the fact we are at the beginning of our pre-season, we will be well organized, with talented players, playing offensively with fast transitions. We always, focus at the quality in search of victories, where the show of soccer will bring pleasure” said Head Coach Chiquinho.

When Suns take the field this May 21st, make sure you are there to witness what could be the game of the season! Get you tickets now at www.PalmBeachSunsFC.com. and be on the lookout for updates on players, games, and soccer news.