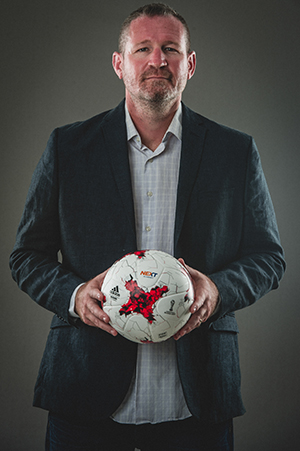 Next Academy Palm Beach is delighted to welcome Brian McMahon as the new head coach for the 2018 PDL season. Coach McMahon was officially announced by General Manager Marcos Silva during an event in December. Coach McMahon has earned over 330 wins in his collegiate coaching career and has served as the Head Coach of Palm Beach Atlantic University men’s soccer program since 2014 where he has been leading a Nationally Ranked Top 25 NCAA Division II program.

During McMahon’s time at PBA he has taken the program to the NCAA II National Tournament the past 3 years while posting an overall record of 44 – 9 including a Sunshine State Conference record of 25 – 2 – 3 in regular season play. “Coach Mac is very well qualified to make our team great this season,” said Silva. “We are thrilled to have him the head of our team this upcoming season. Next Academy Palm Beach needs to make an impact to the league and his background and success as a college head coach will help make a difference to make us grow as a club”.

Coach McMahon has over 20 years of collegiate coaching and playing experience with a resume that includes coaching stints at Palm Beach Atlantic, Belhaven (Miss.) University and Greenville (Ill.) College. “I am very excited to have the opportunity to be the first coach of the Next Academy Palm Beach PDL team” said coach McMahon. “I am very grateful for Marcos providing me the opportunity and following interviews with the Next Academy board it was clear the vision for Next Academy PDL moving forward which I look forward to being a part of.”

McMahon spent two seasons leading Belhaven to back-to-back appearances in the NAIA National Tournament, reaching at least the Elite 8 in both campaigns. His first season was a memorable one as he helped guide the Blazers to their second-ever NAIA National Championship as his team finished 19-4-1 and defeated the University of Mobile 2-0 in the title match. His outstanding work led him to being named the NSCAA and the NAIA National Coach of the Year.

Brian and his wife, Jennifer, have four children: Mackenzie, twins Abby and Keegan, and Ally Parker.